Bamana door lock collected from the Kolokani area of Mali in 1958 by Jean-François Maurel and dated to 1935.

Placed between 1958 and 1976 at the head of the archives of French West Africa, he succeeded in 1959 to convince the French authorities not to repatriate them to France. So the funds A.O.F. is an exception, as we like to Senegal today rank among “the Senegalese exceptions”. Unlike indeed the Indochina archives, Madagascar, the French Equatorial Africa, or Algeria, on behalf of the principle of sovereignty, now find themselves at the center of archives from beyond Sea in Aix-en-Provence, the AOF archives remained in Dakar and are microfilmed since 1961.

Chief curator of the Centre of overseas archives (around 1979), Jean-François Maurel was elected correspondent of the Academy of Sciences overseas on 06/12/2002.

The form of and motifs employed in Bamana door locks usually are invested with symbolic messages despite their formal simplicity. These messages, both inabstract and representational imagery, can be deeply personal. The stylized figure is usually a representation of an ancestor whose presence is required to ensure protection from bad spirits or sorcery. An addition of animal representation such as the butterfly enhances the power of the ancestors and therefore provides additional protection. The presence on the door of a lock representing a woman was also believed to prevent the men from being unfaithful to their wives.

Such locks were given as gifts to young brides and symbolised sexual intercourse: a vertical female figure with a moving ‘male’ horizontal bolt. They were passed from generation to generation. The locks tended to be given names according to the message, ancestor or story to which their form and motifs referred.

The Bamana people live in West Africa, primarily in Mali. They also live in Guinea, Sénégal, Burkina Faso and Niger. They number almost three million today and comprise the majority of Mali’s population (the Bamana dialect is the dominant dialect of Mali and is even spoken by non-Bamana Malians.) Today, most Bamana are nominally Muslim, but traditional tribal beliefs also remain strong.

This door lock is provocative in its symbolic form. Bamana mythology tells how the god Pemba created the butterfly Mpérémpéréni. But Mpérémpéréni was soon overcome by pride and offended Pemba, who in turn reduced the butterfly to a small and fragile creature. The butterfly also represents the deity Mouso Koroni who tried to be Pemba’s equal thus offending Pemba. Perhaps this door lock was presented to a young bride and with it came the message that to avert misfortune she should avoid offending her husband. 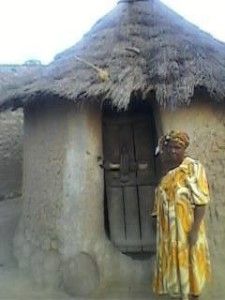