A stunning example of the beaded Bamileke warrior figure depicting the trophy head on the sword.

Description:
An amazing and rare Bamileke warrior figure from the chiefdom of ‘Bali,’ wood statue completely beaded on traditional boubou cloth.  The cloth on the base of the feet has aged and worn away, this can be seen from the photos. The appearance of the beads takes on a dirty / dusty look due to the fact of this being libated with palm wine after ceremonies.

Provenance: Acquired from the chiefdom of Bali by Abdel Aziz Gbetnkom.

Powerful warrior statues like these were carved at the time of great battles against other tribes to symbolise the ‘great warrior’ who enabled the Bamileke to be very strong and dominate any other tribe, by eliminating the enemies and cutting off their heads to bring back to the king to show his victory and as a trophy for him. This is the reason there is a ‘head’ is on top of the warrior’s sword to represent a trophy head.

The Bamileke warrior society was known to wear elephant masks along with leopard skins to display power, wealth, and privilege. They were often worn in ceremonies and given to warriors and people who helped enrich the royal treasury. You can still find many Bamileke tribes using these masks during ceremonies today.

The oldest kingdoms of the Bamileke people were started in the 16th century after population movements in the area. There were many wars that the Bamileke fought in between the Nso and Bamoun people that lived right next to them. The kingdoms eventually dissipated somewhat during the colonial area, when the Germans, the French and the British took over the area through most of the 20th century. 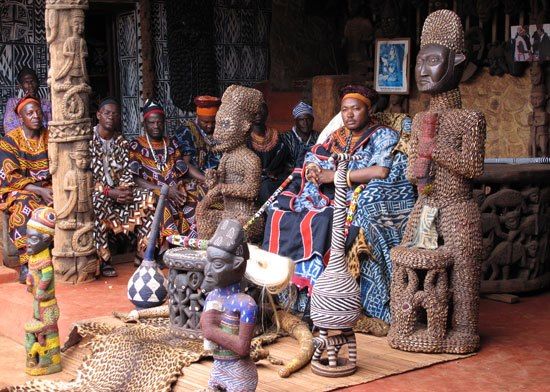