Description:
A beautiful Baule Mami Wata water spirit figure. A depiction of a figure entwined with a snake seated on the back of leopard. Wonderful use of polychrome paint to decorate this Baule figure. Bright and vibarant. Both the leopard and snake are creatures highly respected by the Baule and are linked to the powers of protection.
Additional images

Mami Wata spirits are usually female but are sometimes male. At once beautiful, protective, seductive, and dangerous, the water spirit Mami Wata (Mother Water) is celebrated throughout much of Africa and the African Atlantic. A rich array of arts surrounds her, as well as a host of other aquatic spirits–all honouring the essential, sacred nature of water. Mami Wata is often portrayed as a mermaid, a snake charmer, or a combination of both. She is widely believed to have “overseas” origins, and her depictions have been profoundly influenced by representations of ancient, indigenous African water spirits, European mermaids, Hindu gods and goddesses, and Christian and Muslim saints. She is not only sexy, jealous, and beguiling but also exists in the plural, as the Mami Wata’s and Papi Wata’s who comprise part of the vast and uncountable “school” of African water spirits.

Mami Wata’s presence is pervasive partly because she can bring good fortune in the form of money. As a “capitalist” deity par excellence, her persona developed between the fifteenth and twentieth centuries, the era of growing trade between Africa and the rest of the world. Her very name, which may be translated as “Mother Water,” is pidgin English, a language developed to facilitate trade. Countless enslaved Africans forcibly brought to the Americas as part of this “trade” carried with them their beliefs, practices, and arts honouring water spirits such as Mami Wata. Reestablished, revisualized, and revitalized in the African Atlantic, Mami Wata emerged in new communities and under different guises, among them Lasirèn, Yemanja, Santa Marta la Dominadora, and Oxum. African–based faiths honouring these manifestations of Mami Wata continue to flourish in communities throughout the Americas, including Haiti, Brazil, and the Dominican Republic. 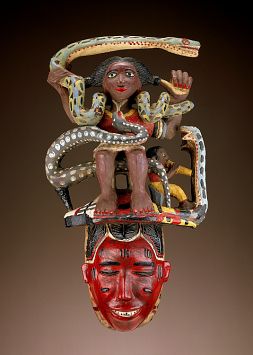