Description:
Dogon bangle, open-ended bangle made from iron with the twisted style design. It has a scroll finishing at either side of the opening but is not very visible due to some age related rusting. The bangle is nicely shaped and a piece of work created by a Dogon blacksmith. Simple and effective shape and design.

Within the Dogon their jewellery is considered much more than just and item of body adornment. Often it is much more than that for example bracelets, bangles, rings and necklaces are known to signify that its owner may be linked with or to the ancestors or spiritual leader. It is also a way of identifing the weaer may be a priest or caretaker /keeper of a particular alter. 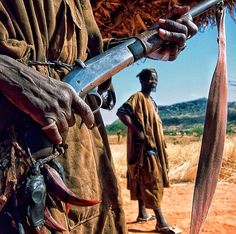