Description:
Dogon necklace. One half of this necklace has the twisted style so often seen on bangles whereas the other half remains plain giving a contrast. Crafted from iron having scroll ends created on either side of the necklace opening. The main body of this necklace incorporates twisted sections creating an open loop to which a single ring of iron has been added. A small tag design adornment sits neatly on the iron ring. An interesting item of Dogon jewellery.

The Dogon are known for their iron bracelets and adornments in general which are often made out of wrapped iron. Bracelets were made to be worn but also used as a gift for the deceased. These bracelets were also used as fetishes, objects believed to have supernatural powers and therefore could protect the wearer.

Worn by the Hogon of the village, the Hogon being a religious figure as well as a temporal authority. The Hogon may be hereditary or may be chosen from among the village elders—custom varies from place to place. The Hogon is always a man. After being chosen, a Hogon must pass through several months without washing or shaving. After initiation, he wears a red cap and a pearl bracelet. Hogon live alone and should be celibate, but a village girl may act as a maid. So revered is the Hogon know body should touch the H.

Because of their belief in the powers that items of body adornment such as jewellery hold it is not that the hunters of the village will also be wearers of such item for their protective powers. These powers are also in the form of charms or amulets. The metal workers of the Dogon are famed for extraordinary creation and construction of jewellery. Many charms or amulets are made in the form of bearded figures, sun, stars, snakes, rabbits and monkeys. Each of these symbolising its own power and protective property. 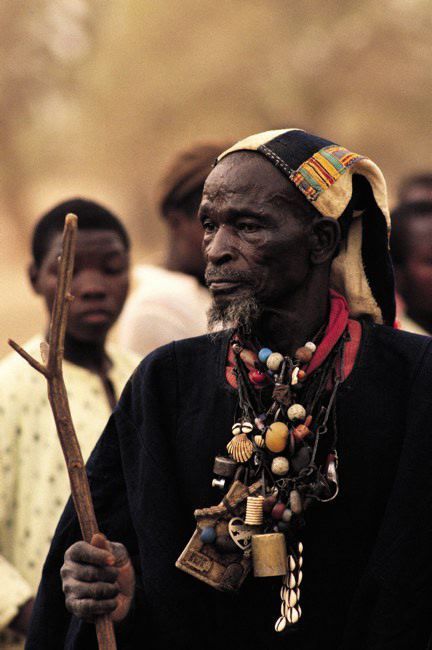