Description:
Stunningly alive and visually vibrant applique textile from the Fon of Benin. Depicting many creatures predominately animals in truely expressive style and colour, each having its own symbolic meaning and purpose for their enclusion within this piece of applique Fon art.

Throughout its history, each Fon (king) had special symbols and proverbs associated with his rule. The symbols were used to decorate wall hangings, flags, umbrellas, buildings and other royal items during the reign of the king. These remarkable appliqué banners are among the most important items of royal court art from the Kingdom of Dahomey, now in the Republic of Benin. Until they transferred their role to the making of tourist arts in the mid-twentieth century, families of specialist textile workers at the court in Abomey supplied dramatic wall hangings that praised the king and illustrated key aspects of his social identity and achievements.

Most Fon today live in villages and small towns in mud houses with corrugated iron gable roofs. Cities built by the Fon include Abomey the historical capital city of Dahomey, and Ouidah on what was historically referred to by Europeans as the slave coast. These cities became major commercial centres for the slave trade. A significant portion of the sugar plantations in the French West Indies, particularly Haiti and Trinidad, were populated with slaves that came from the Slave Coast, through the lands of Ewe and Fon people. 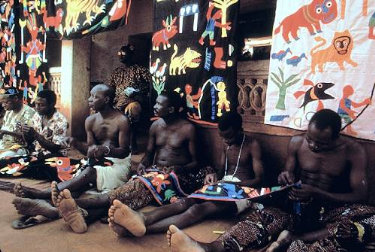