A stunning example of a Fon Assen Acrelele altar. A very interesting authentic Fon piece, this has been authenticated and estimated to have been made in 1960.

Description:
A very interesting authentic Fon alter known as an Assen. This has been authenticated by a reputable Fon collector as authentic and approximately 1960.  Comprising of a lightly domed disc as the main surface and embellished with cone-shaped metal pieces that give off a beautiful windchime type sound and a braced stem underneath. On top is a seated male with two other figures one kneeling and also a bird and a couple of other adornments. 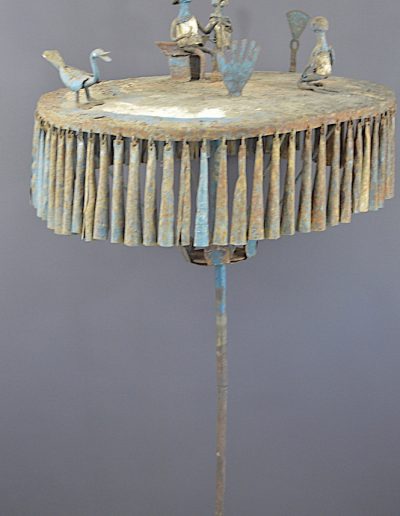 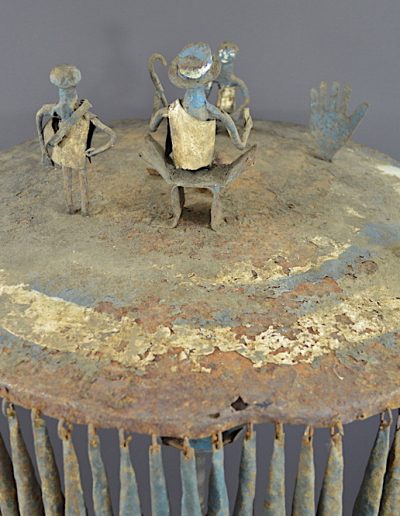 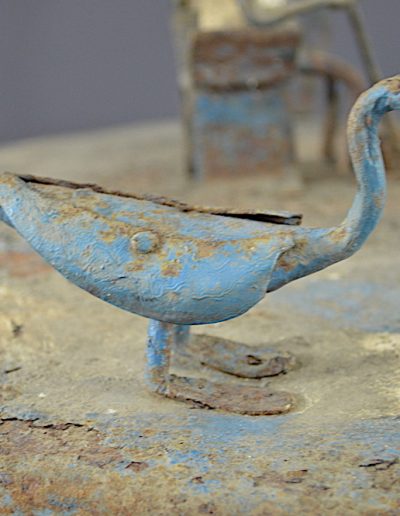 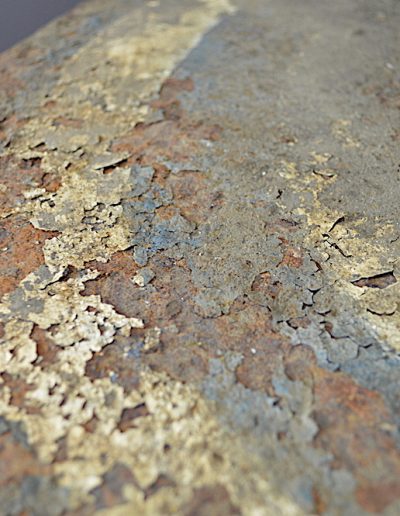 The Assen is a three-dimensional object. Its basic shape is a gourd with its lid, mounted on a metallic stand which can be pushed into the ground. This shape has been preserved in the Assen n Godokponon. Over time the central part has become stylised. In the Assen Godokponon, it became transformed into a series of curved colonnades which were brought together at the base and fanned slightly outwards at the top from the central axis. The widening out of the upper part, in spite of the space between the colonnades, continues to give an idea of the initial recipient. The Sinuka has lost its functional aspect – thanks to the smiths at the court of Abomey it has become a beautiful object where space is integrated into the volumetric construction. What was once the lid of the gourd has become similar to a roof whose surface is used for the expression of maxims and proverbs or elements recalling the kings’ assumed names. These different surface transformations are sometimes completed by the addition of pendants on the upper tray.

There are two forms of Assen, the Assen Acrelele used by the Bokonon (diviner) and the Assen Hotagantin. The Assen Acrelele is the one set up by the Bokonon or diviner before beginning consultation of the Fa allowing him to see into the past, present and future. This sort of Assen has an upward curved piece of metal on the main stand which can be used if need be as an elbow-rest by the diviner. The Assen Accrele does not infer the personal ancestors of the diviner, but all those who carried out the craft before him, who no longer exist, but whose active presence is expected to lead the consultation, which involves simultaneously diagnostic, the search for a solution and a cry for help, to a successful conclusion.
The Assen Hotagantin is not really an altar but more of an indicator of well-reputed houses. In general, they are set up on the summit of dwellings and, in Abomey in particular, on the Jèho at Huetanu times, or at yearly ceremonies. This practice has now almost disappeared. But the most famous Assen n are those dedicated to the former kings of Danhomè, some of which can be seen in the Abomey Historical Museum.