Description:
A stunningly styled Kambata Headrest. From the Kambata tribe of Ethiopia. Lovely darkened patina on the top of this headrest suggesting great signs of good use. Wonderful incised carving throughout this headrest. the elliptical top on an open support and an oval base. Due to the age and usage for this lovely headrest there are hairline cracks but they are all stable.
Additional images

The Kambata make headrest in a style that is common to many cultures in Ethiopia, typically being made of three flattened columns, incised and carved surfaces and flattened oval projections coming from the top of the outer columns. Each headrest is carefully designed for its owner and for their comfort. Durability is also an important factor as many are carried around where ever the owner travels to. With the addition of the spiritual symbolism holding the belief that it links the owner to the ground, and in some societies it is believed to function as an antenna to the ancestors, and as such serving as a channel by which ancestors transfer their dreams to the owner. The headrest is more than just a functional item, for it holds so much more.

Headrests are known from a few places in the world, they are most prevalent and well-known from traditional African cultures, as a traditional African means of protecting intricate hairstyles while sleeping and/or resting. Being used as a pillow elevating its users head,  preventing invasion of both insects and snakes from entering the ears while sleeping. Being used as a household item for sitting on like a stool would be. Headrest also carries spiritual symbolism and as such upon the death of the headrests owner, this tribal item would be either buried along-side the deceased or alternatively passed down to an heir or relative. 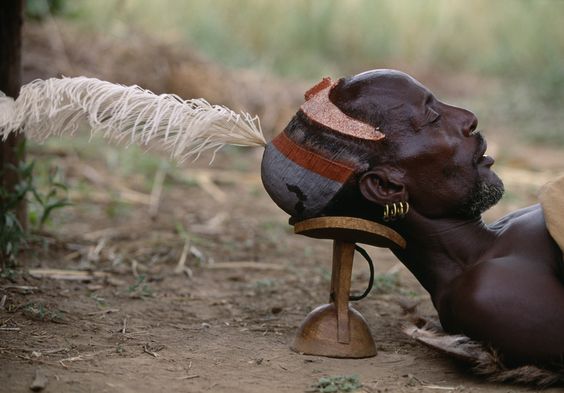 Photograph taken by Michael Gers
Back to stoolsRequest more info