Very interesting Kuba Shoowa textile, the style of the design almost depicts hearts in the centre of the cloth bordering with diamond shapes.

Description:
A fascinatingly interesting piece of Kuba Shoowa textile. Very creative use of shapes embellishes this work of art. Using what almost resembles heart shapes across the centre, rectangles, and diamond shapes edge this piece. Black-coloured raffia thread has been embroidered in places giving a three-dimensional effect. Random choice of design to one edge which is so characteristic of these textiles. 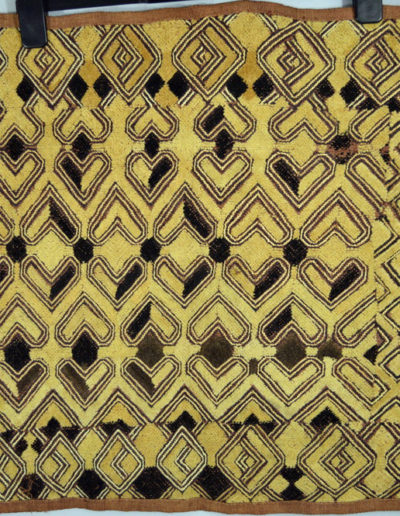 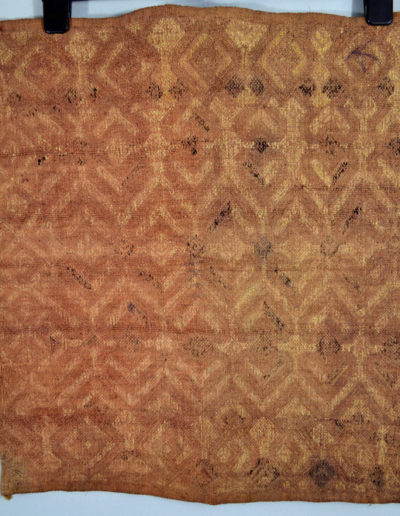 The most commomly known of the Kuba textiles are the cut-pile Shoowas or Kassai Velvets. Named after thr river along which the BaKuba enhabit. Sometimes ‘Buiin’ (plural) or ‘Winu’ (singular), which means ” design” is used to identifythese squared velvets, as is Shobo or Shoba, a term which appears more frequently in recent liturature. Work on high quality velvet can last a month if not longer. First, the embordery is laid on a basic square of raffia cloth that will have been woven by the men of the village, as it is the job of the men of the village to both collect the raw palm leaves and process them to the stage where it isthe women, whose job it is , to do the embroidery. The embroidery process then begins, passing a strand of raffia thread through a needle, then passing the needle in and out of the cloth underneath the warp and weft thread. At the end the strand is cut with a small knife so that only a few millimeters remain visible. The weaver then repeats this process until a linear block of the same colour has been completed. The work continues until the entire base cloth is conceled by embroidery. The combination of colour blocks produces the interlaces and knotted, undulating designs. Improvisation and irregularity characturize the Kassai Velvets. This is because the weaver/embroiderer works without a planned pattern or sketch. Often the design is built up and created from memory, repeating the most common designs and colour combinations found in the region. The message conveyed is up to the artist, who is the only one who can explain what she intened to represent. A typical sized finished piece of embroidered cloth is generally about 61cm x 46cm or there abouts. Some of these cut-pile cloths are very finely textures, while others maybe much thicker and plush. Hundreds of patterns can be found on the cut-pile shoowa embroidery. The most widely use motifs enclude juxtaposed lozenges, interlaces, rectilinear designs, spirals, circles, semi-spherical designs and meanders. Although both Kassai Velevets/Shoowa textiles have been describe as austere, subtle, and monochromatic, they nonetheless have a powerful inpact on the viewer. 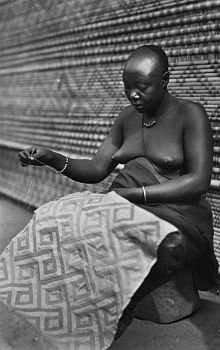