An incorporation of bold and delicately embroidery on this Kuba textile, from a private collection, Ghent – Belgium.

Description:
This interesting Kuba textile has lovely incorporation of both bold and more delicate embroidery. The centre, a larger portion of the textile, has a geometric design using hexagonal shapes with black infills within every hexagon. Two edges have been embroidered in a more fine style using black raffia to form a zig-zag pattern, in complete contrast to the bold middle. Stunning embroidery throughout.

The most commonly known Kuba textiles are the cut-pile Shoowa or Kassai Velvet.

The art of making Kuba cloth is very time consuming and can take several days or even months to complete. It is the responsisblity of the men first gather the leaves of the raffia tree, soak and soften them as raffia is a notorisously difficult medium to work with. They then rub the raffia fibres in their hands to soften it and make it easier for weaving. This prcess completed the raffia is then wound into skeins in preparation for weaving then and only then can the raffia be woven. Weaving being the responsiblity of the men also. After they’ve completed weaving of the base cloth it then becomes the responsibity of the women to embroider the woven cloth. They do this by pulling a few threads of the raffia fibres, inserting them into a needle running the needle through the cloth until the fibres show up on the opposite end. They then take a knife and cut off the top of the fibers, leaving only a little bit showing hence creating the cut pile texture.  Doing this hundreds of times forms a design. The designs are seldom planned out ahead of time, and most of the embroidery is done by memory. There are several different sub groups of the Kuba people. Each group has it own unique ways of making the fabric. Some make it thicker, longer, shorter, or with different patches. Each patch is symbolic and many times a piece has many different meanings. When Kuba cloth originated there were probably no patches used, but as the cloth is brittle it is quite likely that the patches were used to repair the frequent tears. Producing such intricate and complex works of stunning Kuba art passing the skill and technic’s down from one generation to another. The more intricate and exuberant the designs are made for the royalty, nobility and chiefdom. Although shoowa and kassai velevets have been describes as austere, subtle, and monochromatic , they nontheless have a powerfuly impact on the viewer. 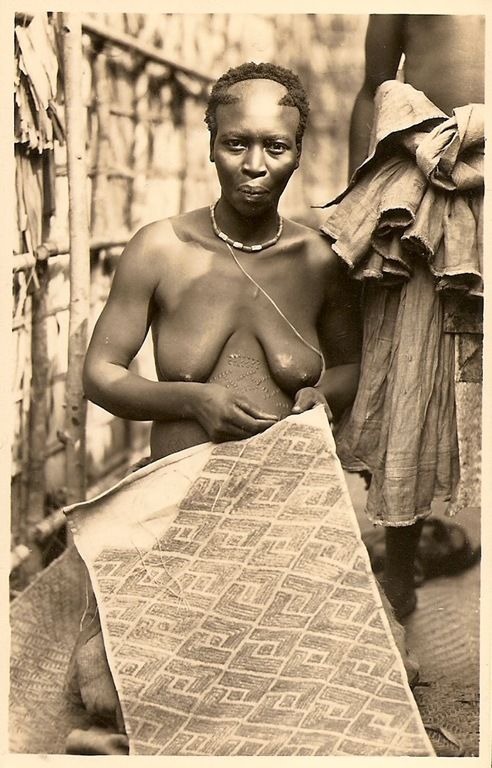