The art of making a Kuba textile is very time consuming and can take several days to form a small piece. The men first gather the leaves of the raffia tree and then dye it using mud, indigo or substances from the camwood tree. They then rub the raffia fibres in their hands to soften it and make it easier for weaving. After they’ve completed the base cloth the women embroider it.

Using the leaves of the raffia tree, the Kuba people of the Congo first hand cut, and then weave the strips of leaf to make pieces of fabric, called raffia cloth. There are several different subgroups of the Kuba people. Each group has different and unique ways to make the fabric. Some make it thicker, longer, shorter, or with different patches. Each patch is symbolic and many times a piece has many different meanings. When Kuba cloth originated there were probably no patches used, but as the cloth is brittle it is quite likely that the patches were used to repair the frequent tears. Later each patch developed a meaning, many patterns are uniquely arranged to tell a story.

After they’ve completed the base cloth the women embroider it. They do this by pulling a few threads of the raffia fibres, inserting them into a needle running the needle through the cloth until the fibres show up on the opposite end. They then take a knife and cut off the top of the fibres, leaving only a little bit showing. Repeating this process hundreds of times forms the pattern and creates a design. The designs are seldom planned out ahead of time, and most of the embroidery is done by memory. 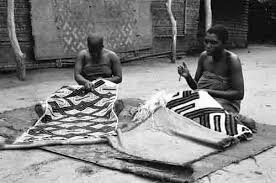