Maasai shield, as younger warriors could only use black, white, or grey on their shields, indicating that the shield illustrated here would be owned by a proven warrior herder.

£1200.00
Description:
An absolutely stunning and old Maasai shield, made from a much thicker hide than the usual buffalo skin. After showing this to a tribal weapons expert it is possible that the hide used could be possibly rhino, elephant or even giraffe skin. This Maasai shield looks to have seen a few battles due to the nicks, slices, scrapes and repairs on the front and there is some damage to the handle on the reverse. This shield also has its own bespoke stand.

Among the Maasai, red paint was traditionally obtained by mixing earth with blood or the red sap of the solanum campylae fruit. White was derived from local clays, and black from the skins of burnt gourds. Younger warriors were only allowed the use of black, white, or gray on their shields, indicating that the shield illustrated here as it has red pigment that it would owned by a proven warrior herder.

Shields remain one of the Maasai warrior’s most important tools. They were used in warfare and hunting as well as practice and training. Outside of the warring context, however, shields were used in rites of passage and also functioned as prestige objects and symbols of identification. Maasai society is organized into distinct age and sex grades. Early twentieth-century studies revealed that spear markings and shield designs were once used to differentiate some of these Maasai subgroups and also hinted at a larger, complex lineage identification system. Shield designs are known as sirata, many of which have fallen into disuse and are poorly understood even by the Maasai themselves.

Maasai from the grasslands of southern Kenya and northern Tanzania used such shields in warfare, hunting, and rites of passage. A buffalo hide is usually sewn onto a wooden frame (not buffalo hide on this shield) is the canvas onto which an artist traced rich polychrome geometric patterns.

While the Maasai no longer range and raid at will over the East African landscape, they have continued to fight to retain their identity as a tribe and culture, picking and choosing which bits of the modern world they wish to adapt. Thus a red-robed and sandaled herdsman leaning on a spear in the South Rift is quite likely to be chatting in Maa on a cell phone, and a smartly-dressed businessman in Nairobi might go home for the weekend to a hut surrounded by a thorn boma that keeps lions out of the livestock. 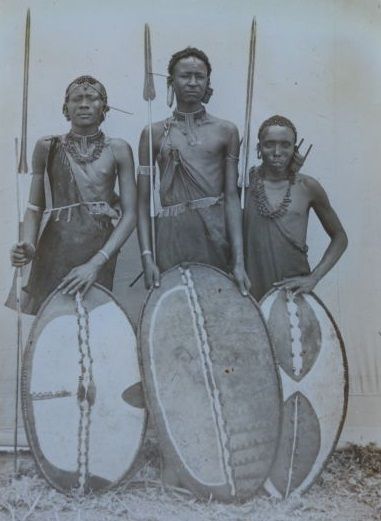