The Maasai shield remains one of the warrior’s most important tools. They were used in warfare and hunting as well as practice and training.

Description:
This very symmetrical painted Maasai shield is constructed from thick hide stretched over a wooden frame and is lashed using hide strips to the outsides edges and the central rib.
The handle is part of the wooden central brace. There is a thick hide knuckle pad at this point also. Scuffs and scrapes and a wonderful decoration, complete with a display stand also part of the sale.

Although this looks to have some age I believe this was made to be sold.

Maasai from the grasslands of southern Kenya and northern Tanzania used such shields in warfare, hunting, and rites of passage. A buffalo hide sewn onto a wooden frame is the canvas onto which an artist traced rich polychrome geometric patterns.

Among the Maasai, red paint was traditionally obtained by mixing earth with blood or the red sap of the solanum campylae fruit. White was derived from local clays, and black from the skins of burnt gourds. Younger warriors were only allowed the use of black, white, or gray on their shields, indicating that the shield illustrated here if it was authentic would probably owned by a proven warrior herder.

Shields remain one of the Maasai warrior’s most important tools. They were used in warfare and hunting as well as practice and training. Outside of the warring context, however, shields were used in rites of passage and also functioned as prestige objects and symbols of identification. Maasai society is organized into distinct age and sex grades. Early twentieth-century studies revealed that spear markings and shield designs were once used to differentiate some of these Maasai subgroups and also hinted at a larger, complex lineage identification system. Shield designs are known as sirata, many of which have fallen into disuse and are poorly understood even by the Maasai themselves. 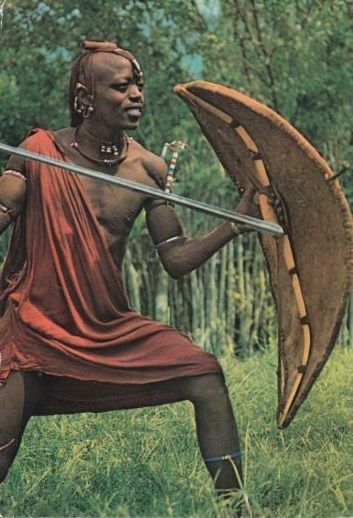