Being decorated so highly it is possible this particular Oromo Chicho milk container would have been made and gifted at a special ceremony such as a wedding.

Description:
The lidded Oromo Chicho milk container is made from vegetable fibres and supported with leather straps. Inside this jug, there is an old black patina encrusted which may be from a combination of materials used to make the jug waterproof. This milk jug still has a very mild aroma of what it once contained. The container comes from Ethiopia and may belong to Somali, Borana or Gabra peoples. Being decorated so highly it is possible this particular Oromo container would have been made and gifted at a special ceremony such as a wedding.

Ethiopian pastoral peoples have a variety of containers made in various materials (gourd, wood, animal horn, plant fibres, and leather) and using different kind of designs and decoration. Most of them are made from a combination of media and richly decorated. This type of containers is a hand woven watertight basket in the form of a jug. Leather straps help to carry the Jug. As the pastoral people have to move constantly from place to place, most of the jugs have leather handles which allow the owner to carry his or her jug everywhere he or she goes. These straps are decorated with cowrie shells, which are said to symbolize fertility, femininity, wealth, and protection. These jugs were woven by women using fibre from the roots of various vegetable species available in the area. It takes months to finish a jug, especially for the large container. The women use a coil technique from the base. Strands of fibres are bunched together and wrapped at regular intervals with either one or two other fibres. In addition to the Borana and Gabra, similar vessels are found among Somali, Rendille, and several Oromo groups. These milk jugs were a part of everyday life, used to carry and preserve milk from their cows. Milk is an essential part of pastoral people’s diet. Milk was also used in rituals of fertility where it is compared to the semen according to scholars. Thus, similar Jugs, especially the ones call Chicho, or wedding jugs, have an important role to play in marriage rites as symbol of a womb. The family of the groom will present a jug to the new couple. This jug means the marriage itself. Destroying or loosing this jug could cause misfortune for the couple. Milk jugs are present in every household and used daily.  The most decorated ones were reserved for the head of the household or for visitors. For more information: Read Raymond A. Silverman comments on the Baltimore Museum of Art Borana milk container, in Frederick John Lamp (ed.) 2004, SEE THE MUSIC. HEAR THE DANCE. RETHINKING AFRICAN ART AT THE BALTIMORE MUSEUM OF ART, pp. 250-253 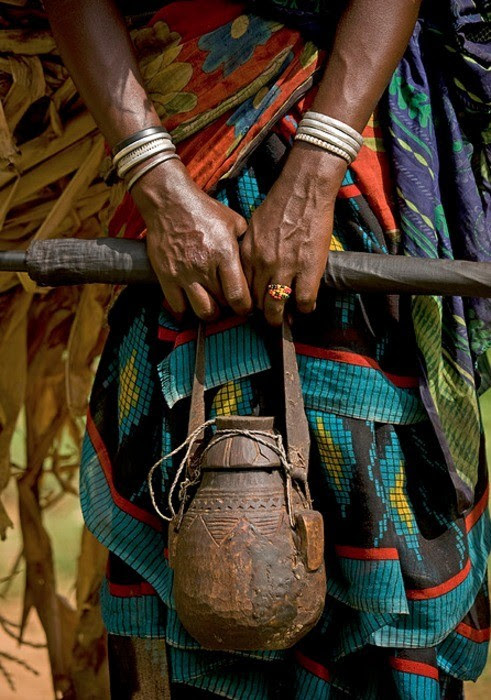 Back to pots and vesselsRequest more info