A beautiful and very old Senufo Pombia rhythm pounder, also mainly known as “Deble” bush spirit pounders. This is one of two we found in Talekaha in the Korhogo region of Ivory Coast, both believed to carved by the same carver. The head adorned with a crocodile, associated with intellectual power, significant of the knowledge the elders hope to impart on the young initiates. The female figure wears a necklace, arm and wrist bangles along with a few age cracks now and quite features too.   I have never seen pounders as old as this in one piece, this is still very solid and extremely heavy, exquisite and absolutely stunning.

The rhythm pounder (deble) from the Senufo people of the Ivory Coast was once a crucial prop in both commemorative ancestral rites and in initiations of adolescents to adult society; it was also a benevolent symbol of fertility and a conduit to the departed.

The few known male and female rhythm pounder pairs are thought to represent the primordial couple, referred to as ‘Pombibele’, which means “those who gave birth.

These pounders were traditionally used at funeral ceremonies for Poro society members. In some areas, they are actually pounded, at others, they are gathered at the centre of the ceremonial grounds.

The social, economic and spiritual lives of Senufo men are governed by an overarching initiation society known as Poro. A Senufo man must pass through all stages of the initiation society to be considered a rounded man with full insight into ancestral teachings and traditions. Each vocational group (including farmers, traders and artists) has its own Poro group through which they must graduate before becoming a member of the Senufo community. 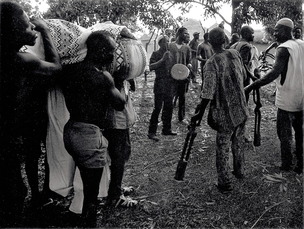 Photo taken from http://anthromuseum.ucdavis.edu
Back to tribal figuresRequest more info