£700.00
Description:
Yoruba Onile figures from Nigeria. A lovely pair of Onile figures made of lead but filled with clay. Both figures are kneeling with their arms bent at the elbow, arms across the body. Clearly visible facial features, most notable are the bulging formation of the eyes. Both mouth, nose and ears are a wonderful compliment to these fascinating little wonders. The quirky formation of a hat possibility with feathers on each figure along with the eroded appearance due to being libated these figures are very special.

Ogboni is a powerful men’s society among the Yoruba. It has the power to depose a ruler, who is considered unworthy to rule. Their power flows from the earth and their main shrine object is Onile, a bronze/alloy figure with a core of clay. Onile is considered to be an earth goddess. The figure’s bulging eyes symbolise that it is filled with the spirit of Onile.

Onile, or “Owner of the House”, are free-standing figures usually found in pairs. They are cast at the founding of a settlement and establishment of an Osugbo Lodge and will serve an entire Lodge. They symbolise the original progenitors, the male and female members of the Osugbo,
and by extension the entire community. This very charming Onile figure is representational of the distinctive style used for such figures, with their bulging eyes, elongated faces, broad shoulders and thin arms. The kneeling pose and “devotional” locking of hands at the abdomen may be associated with oath-taking or paying of homage. This small figure is very large in meaning and represents the values and mores that have long been associated with the Yoruba people. 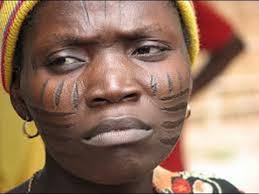 A Yoruba woman with typical scarification.
Back to bronzesRequest more info