A wonderful large Bamileke Mekan ceremonial/festival hat. A cotton thread has been used to make this stunning hat using a crochet technique. Predominantly of a light brown/beige colour cotton thread with a darker brown to add four contrasting rings to the headband of this hat. Being then adorned with numerous individually made and attached 3-4cm bobbles that completely cover the hat. In contrasting dark brown, light brown and beige colours adding an impressive quality and prestige.

The Bamileke any of about 90 West African peoples in the Bamileke region of Cameroon. They speak a language of the Benue-Congo branch of the Niger-Congo family. They do not refer to themselves as Bamileke but instead use the names of the individual kingdoms to which they belong or else refer to themselves as “grasslanders.” Their origin is uncertain, but it appears that under pressure from Fulani invasions in the 17th century they moved southward in a series of migrations from the region that is now occupied by the Tikar people.

Hats within the Bamileke are an important part of dress. It would be unthinkable that an outfit or ceremonial costume would be worn without the compleation of a hat. The hats are of many shapes and made using a vaiety of materials. Cotton crochet thread of many different colours, feathers and on occasions porcipine quills being some of the chosen hat creating materials. 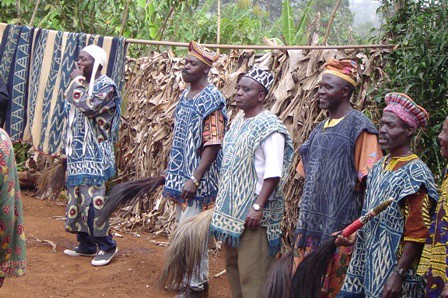