Small and wonderfully made Bamileke Mekan hat both dark/light brown coloured cotton thread. The top having been beautifully designed. Finger/ pieces have been made and around the entire hat. There are signs of damage to the headband due to wear of which detracts from this hats style.

The Bamileke is the native group which is now dominant in Cameroon’s West and Northwest Regions. It is part of the Semi-Bantu ethnic group. The Bamileke are regrouped under several groups, each under the guidance of a chief or fon.

In Cameroon Grasslands region hats are made in wide variety of materials such as vegetable fiber, cotton, and feathers, and in different shapes. Hats are a very important part of prestigious regalia in the Cameroon grasslands. They are worn by men during special ceremonies being unimaginable to see a notable in an outfit without his hat such is the importance of the hat.  Rather than just a simple accessory the hat could be an indication of the owner’s social rank and status. So important and revered are these hats with sculputarl design that they are sometimes represented on carved figures. 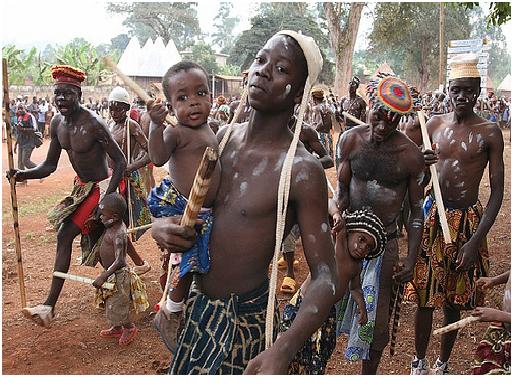